This page is a quote from the PhD Thesis of P. Brommer.

If there is a disadvantage to Powell's method as described above, it is that it readily jumps to the closest local minimum available, ignoring any other, perhaps even better local minima. As the sequence of $Z(\boldsymbol\xi_{i})$ is strictly monotonous, it is impossible to escape the attraction regime of a minimum. If this minimum does not happen to be the global optimum of the target function, the algorithm will not end up with the optimal solution. The Simulated Annealing method can be used to sample configuration space in search of the global minimum. It was first described by Kirkpatrick et al.1 and is based on the work of Metropolis et al.2.

The idea of Metropolis and coworkers is rather basic: When simulating an ensemble of atoms, a small random change is accepted, if the resulting change in energy $\Delta E,$ is negative. Changes with $\Delta E>0$ are accepted with a probability $P(\Delta E)=\exp(-\Delta E/k_{B}T)$ and rejected otherwise. Frequent application of this basic step is comparable to simulating the ensemble in a heat bath of temperature $T$. Due to the introduction of chance to the simulation, methods based on this idea are called Monte Carlo methods, as an allusion to the famous casino.

Analogous to annealing in metals, a system is first “heated” at a high effective temperature. Then $T$ is decreased slowly until the system “solidifies”. The temperature sequence is decisive: While quenching, i.e. a rapid decrease in temperature, will lead to trapping the target function in a local minimum (equivalent to a metastable state in a physical system), it is possible to attain the global minimum with a certain probability when cooling slowly enough.

This will modify the basic step length by a factor between 1/3 and 3. The step scaling function is plotted in Fig. 2.6. 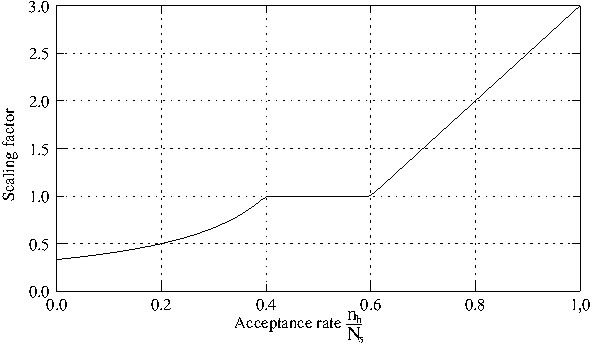 Figure 2.6:The scaling factor for the basic MC step length depends on the acceptance rate. Both extremely high and extremely low rates are inefficient. From [4].

After $N_{T}$ step length adjustments, when the system is believed to have sampled the entire accessible configuration space, the effective temperature is reduced by a factor (e.g. $T'=0.85 T$), and the whole procedure is repeated at the lower temperature. Thus, the system is “cooled” slowly. Two conditions must be fulfilled to stop the algorithm:

Simulated Annealing is extremely expensive in function calls and thus in computation time, especially compared to Powell's method described above, but it has a chance of finding the global minimum, even if the starting point is not in the attraction regime. In [3], Corana et al. compare their algorithm to other optimisation procedures. They claim that although Simulated Annealing does need many function evaluations, it has the highest chance of obtaining the global minimum.

Except where otherwise noted, content on this wiki is licensed under the following license: CC Attribution-Share Alike 4.0 International